Daniel Tosh used twitter a little differently. On his show Tosh.o, he did a segment he called “Is it racist?” in which he showed this video from Tim James’ campaign for Governor of Alabama.  After reassuring us that it was in fact, very racist, he then tells the audience to tweet their thoughts to James on his twitter account: @TimJames2010.

Don’t bother looking up the account…it’s already been taken down.  I don’t think any amount of PR could weather that shit storm.

Luckily, twitter doesn’t forget, and a quick search for his twitter name will show you that people are STILL sharing their thoughts with James (the episode aired over a month ago on June 17, 2010).

You can watch the whole video it here.

Within seconds, James’ reply stream was flooded with messages of hatred and anger.  Tosh even responded hilariously to some of the tweets on the blog. 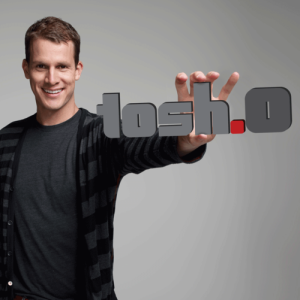 James abruptly became the first individual (using twitter) I’ve seen get ridiculed on such a large scale on twitter.  In a flash, he became the most hated man on twitter.

Of course the fact that he had a twitter account is what opened him up to this attack.  Because people could @reply him, they felt like they were talking to him, not just about him.

Think about this power.  The power to immediately drown someone’s reputation using the web.  You can’t search James’ name on twitter without some ruthless attacks coming up.

Makes you think about the power individuals have on the web today…and the importance of using that influence responsibly. [insert spider man quote]

It’s also a reminder that by creating an account on twitter, you are opening up a new communication line directly to you.  If you make a mistake, whether you want to use twitter to listen or not doesn’t matter.  People will tell you what they think if they want to…

…or if comedy central tells them to.